Showing posts from March, 2009
Show all

It’s a crisp, bright, spring morning in Montclair, New Jersey. Angel Williams (pictured in the front row on the right) stands in front of the students in her hip-hop class at New York Sports Club. She starts demonstrating a series of moves that evoke the rarefied world of hip-hop glamorama. Suddenly, forty bodies are moving in sync—and it is energizing, enchanting and downright funky. In fact, it is hard to articulate how much fun it is to hip-hop with Angel. The class, in its exuberance, diversity, and intense love of dynamic movement, is in its own way a metaphor for life in Montclair. By way of full disclosure, I will say that I’ve resisted hip-hop dancing, leaving it to people like those in the video posted here (from the hip hop class at NYSC),  but it’s been in my world forever and I love to dance---especially when I drink coffee! Today, after several cups of coffee, I went to hip-hop and now there’s no turning back. Many days, I’ve had the privilege of drinking coffee with Ang
16 comments
Read more

Alma's Coffee Tragedy & Building Community One Cup at a Time 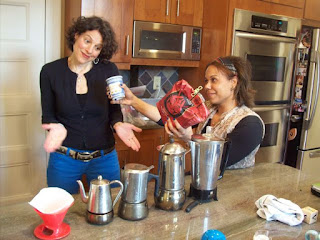 Most of us know what it feels like to be desperate. It's an uncomfortable, breath-stifling feeling that can take hold with an uncomfortable intensity. Henry David Thoreau famously wrote about desperation in "Walden" which was published in 1854. "Most men (and women) live lives of quiet desperation. What is called resignation is confirmed desperation..." He then repeated his sad observation that "Most men live lives of quiet desperation and go to the grave with the song still in them." On a day to day basis, there are many ways to overcome a sense of desperation or an uncomfortable feeling that something is not right. One way is through community. There is nothing like sharing coffee to abet any sense of gloom and doom. A well-made cup of coffee, rounded off with edifying and meaningful conversation, can uplift us and prepare us for the tasks at hand. Beautiful, wonderful coffee! So it came as a surprise during a visit to my friend Alma Schneider&#
9 comments
Read more
More posts