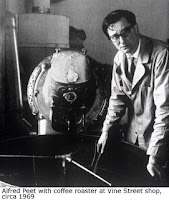 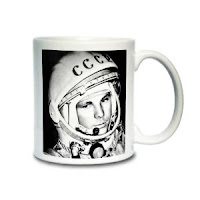 Today we are celebrating flying high!

50 years ago today on April 12, 1961, Yuri Gagarin became the first person to travel in space. He is a much-celebrated cosmonaut, who literally set the standard for aspiring to lofty ambitions.

He too was ambitious, having immigrated from Holland in 1955 after spending time in Indonesia working for Lipton tea. He was also focused on altitude--specifically "high-altitude" coffee from Costa Rica, Guatemala, and East Africa. He found this coffee superior to what was available in the United States at the time.

Drinking a cup of Peet's coffee today, I was grateful for its strong aroma and slightly bitter taste---offset by just the right amount of skim milk.

Kudos to Gagarin and Peet---who both stand tall in the annals of firsts!

Anonymous said…
Yes. Sometimes seemingly unrelated events have a connection. For instance, several people have mentioned that shortly after I was born the Viet Nam War broke out. Although I fail to see the exact connection, perhaps there is something in what they say.

Perhaps Gagarin was looking for the perfect coffee-house location in an ultra-secret caffeine related communist mission.

Why did they send him into space? Maybe he made one too many jokes about Kruschev's egg-shaped head.

Frankly if anyone had to go into space, I think it should be someone that it would nice to get rid of; like Norman Mailer (if he was still alive) or that guy on the Today show.

Anonymous said…
You should re-write your profile so that fewer sentences start with I. It is irritating to readers, such as myself, who, even when they read someone else's profile, are really only interested in themselves.