Gray Skies, No Problem: Drinking Coffee at the National Gallery of Art in Washington, D.C. 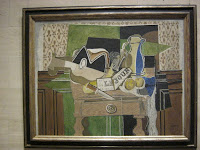 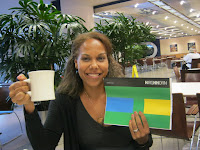 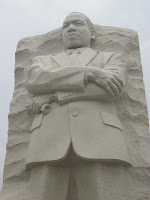 On Labor Day, there was a gray canopy hanging over Washington, D.C. And though the day was utterly devoid of that bright September sun that we all love so much, the steel grey of the sky above was beautiful. Our goal that day was to go to the newly constructed, recently opened MLK Memorial. For some reason, we were giddy with excitement. Perhaps for ourselves, perhaps for our children, perhaps for all of the people who will come from all over the world to see this memorial in the future. For that reason, the gray sky seemed even more beautiful. Even more beautiful was the shades-of-gray contrast between the sky and the monumental grey-stone monument/memorial of Martin Luther King, Jr. rising out of the earth like a gray rocket of hope. We were stunned by the scale.

The memorial is the work of Master sculptor, Lei Yixin. It is 28.5 feet tall and positioned between Independence Avenue and West Basin Drive. One enters the memorial through a stone archway aptly named the “ Mountain of Despair” and then confronts the “Stone of Hope.” One must walk around the “Stone of Hope” to see the imposing, thoughtful image of the dignified MLK—who was 39 years old when he died.

After leaving the site of the memorial and meandering along the paths of downtown Washington, we headed towards the Museum of Air and Space, where we marveled over the Spirit of St. Louis, facebooked photos of the Wright Brothers full-room exhibit, and purchased a “future astronaut” sippy cup at a deep discount—and where I started to crave a cup of coffee.

There was no coffee available at the Museum of Air and Space or the Hirschhorn Museum next door. We moved through the sculpture garden, becoming temporarily transfixed by the sculpture of a figure flying backwards off a horse. Finally, we walked into the National Gallery of Art and headed straight for the cafeteria.

Full disclosure: I’ve had a lot of coffee from the NGA cafeteria in my lifetime. I grew up in the D.C. area and remember using the Iwo Jima memorial as a playground as a little girl and going to school in Falls Church and secretly drinking coffee in the mornings. The coffee at NGA is not Starbucks coffee. It doesn’t have to be. It’s good. The cashiers are exceedingly polite and kind. On that day, I got trail mix and coffee in one of those standard-issue off-white ceramic mugs---a standard that I’ve grown to love over the years. The brew was hot and dark, bold, but not bitter. I devoured it with a dollop of skim milk. Two cups later and I was exhilarated!

As we viewed the work of the great masters, I noted with particular joy a painting by Georges Braque. So glad I had the energy to get excited once again about collage art. Thank you, coffee!

Post-script: I usually have an annual coffee-drinking party at my house in honor of MLK’s birthday each January. Last year, we took a break, as I was expecting another child. However, I am not pregnant and don’t plan to be in January. So, if you’ve been invited in the past, look for your invite!

I've appointed a Blue-Ribbon committee to pore over every phrase much in the way some discect the hidden meaning in Federal Reserve statements. BTW- Dr. Bernanke (aka "the Beard") drinks Dr. Pepper, no wonder so much has gone wrong.

A sub-committee may be required to discern the hidden meaning of using both Gray and Grey in the same paragraph (it must mean something!).

Expect our results to be forthcoming. We're currently pre-negotiating publishing rights with the final bidders being; Scientific American, The Economist and Boy's Life.
September 23, 2011 at 12:53 PM

Nicole Gray said…
Wow, you picked up on grey/ gray. Hosanna! Looking forward to your results. By the way, how much coffee did you drink today?stines
September 23, 2011 at 10:01 PM

Anonymous said…
In answer to your query; none today. However, at least an entire pot of Kicking Horse Coffee's Three Sisters Blend is on tap for tomorrow as it's almost time to go the mattresses (Ref: Godfather 1).

Progress of the B.R. Committee has been slow as disputes over various issues have arisen, including who gets the recliner.

Once the seating arrangements have been worked out, our expectation is for slow but steady progress. Although one jr. member has threatened to Filibuster unless cheese crackers are provided.

Have you tried Emerald Balance Plus yet? In answer to what I imagine your next query to be; Yes. Yes, it can be mixed with; you know what. Although, all tests with Coffee, Splenda (it's splenda!!!), Non-dairy Creamer and E.B.P. should be conducted underground.
September 26, 2011 at 5:48 PM

Anonymous said…
Since Art has been mentioned; I highly recommend Simon Schama's series entitled;
"The Power of Art". There is a DVD set and a book.

8 episodes, each one a profile of a great artist. The program focuses in on a specific key point in the life and work of each artist.

The series is awesome and if you like it, you might also find his previous series; "A History of Britain" interesting as well.

The first draft of an as yet untitled working paper which posits that a Gray-Chan Party Invitation does exist in the Universe have been unveiled.

The new Theorum seeks to unify String Theory and Einstein's General Theory of Catering to explain the fact that we haven't received an invitation yet.

The paper proposes that the invitation for the upcoming Gray-Chan Party is off-set by anti-invitations beyond the 4th dimension of Space-Time. Party invitations, moving at the speed of light, could make RSVPing virtually impossible according to new data that just occurred to us.
This new research seeks to expand on the famous Einstein lecture delivered in 1918 entitled; "Socks where do they go"?
September 28, 2011 at 3:03 AM

Anonymous said…
The Blue Ribbon Committee has paused its in-depth dissemination of recent posts and turned their laser-like focus upon the on-going protests across the US of A.

Frankly we're slightly amused that they seem to be demanding more government when (little do they seem to know) governments were responsible for the whole damn mess. I suppose if someone let a Lion out of his cage in your kitchen, you could blame the Lion for eating your steak dinner... well you get the idea.

Since they don't seem to know what they want, these ambitious protestors, we thought we'd join the cause. If there is chanting, sign waving, rock throwing or general anarchy; we want in!

We've created a list of demands, although there were some on the committee, here at the World Headquarters, that thought it should be a Zen protest (without the fire) and that the demand should be for nothing. "Nothing is what we want," was suggested. However, those who thought we ought to get something out of all this falderal prevailed. So here goes;

First; we want Grilled Cheese sandwiches for everybody.

Next we want JP Morgan to use the full name J Pierpont Morgan, and if anybody laughs when they annouce this they have to pay every man, woman and child a dollar.

Next we want to know what the J stands for and if it stands for Jerry, we get to burn down thier headquarters.

Next we want a Schrubbery.

Next we want Wells Fargo executives to give up company cars and be transported entirely by stage coach from now on. And they have to wear cowboy hats to all meetings.

Next anyone who uses the phrase; "that said" and then says just the opposite should be sentenced to several years of hard labor or have to attend Podiatry school for several years depending on the severity of the offense.

Next Jamie Dimon has to change his name to Jamie Zircon.

These demands are non-negotiable (at least until the check arrives).

mimicoco said…
Nice post. I was checking constantly this blog and I’m impressed! Extremely useful info specially the last part I care for such information a lot. I was seeking this certain info for a long time.
Stone Basin
Thank you and good luck.

Eliza Beth said…
I know your expertise on this. I must say we should have an online discussion on this. Writing only comments will close the discussion straight away! And will restrict the benefits from this information. abstract blue background
January 25, 2020 at 5:43 AM