Have you ever had the experience of waking up foggy, drinking a cup of coffee---and literally feeling your brain and your nerve endings wake up and become alert to the world? I’m almost certain that most, if not all, coffee-drinkers are familiar with this sensation. The good news is that coffee not only makes you “smarter” but it also protects the brain from developing dementia.

I love coffee. Summer is an excellent time to drink coffee, including iced coffee drinks, as well as reliable hot mugs of coffee. The important thing is that the benefits remain, regardless of the season. Recently scientists explored yet another benefit of coffee. It turns out that caffeine consumption reduces the risk of Alzheimer’s disease.

In a study of adults over age 65 with mild cognitive impairment---generally considered a precursor to Alzheimer’s disease---those with higher caffeine blood levels avoided developing Alzheimer’s or at least had delayed progression. Note that these results are based on 2 to 4 years of follow up. 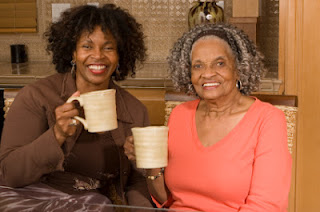 According to the lead investigator, Dr. Chuanhai Cao, a neuroscientist at the University of South Florida, “The results from this study, along with our earlier studies in Alzheimer’s mice are very consistent in indicating that moderate daily caffeine/coffee intake through adulthood should appreciably protect against Alzheimer’s disease in later life. “

That is truly groundbreaking news! The truth really does lie in the data. No one with mild cognitive impairment who went on to develop Alzheimer’s had initial blood caffeine levels above a critical level of 1,200 ng/mL---equivalent to drinking several cups of a coffee a few hours before having a blood sample taken. However, 100% of patients with mild cognitive impairment at the beginning of the study who had caffeine blood plasma levels about the critical level DID NOT develop Alzheimer’s disease.
The takeaway: Coffee consumption---even moderate consumption---decreases the risk of Alzheimer’s disease appreciably. That’s another reason to appreciate coffee---and all of its health benefits…Happy summer!

Anonymous said…
Watch enough "Wheel of Fortune," and play enough of that stupid computer Solitaire game and dimentia is coming down the track like a Freight Train. The even sadder part is that those people (now I'm one those people who talks about "those people") usually take their spouses down with them.

It's too bad that old folks decide to stop learning sometimes. We should found a Coffee/Teach a Senior there's this cool thing called the Internet Day.

If you're not inside you're outside.

Anonymous said…
Coffee can crash or it can flooowww. Be like Coffee, my friend.

Anonymous said…
Actually, I believe you would find the series "The Power of Art" by Columbia U. prof. Simon Schama more entertaining than "The Private Life of Masterpiece," but, be your own judge.

On tap for tonight is the P.O.A. episode about the sculptor; Bernini. When you watch the episode it is difficult not to dwell on thinking; how in the world did he do this? How did he imagine it? How did he accomplish this pefection of likness to the real?

Hans Bethe, the nobel prize winning Physisist, once said about Richard Feynman; "normally, even with great work, you can imagine that if you tried hard enough you could arrive at the same answers, with Feynman, you just don't know how he does it." "That's just why he's a genius." Bernini ditto.
July 3, 2012 at 9:20 PM

Anonymous said…
Here at the Institute, it's that time of year again, you know what I'm talking about, that's right, you guessed it! It's time for the Juzo Itami film festival. 7 days of Juzo movies;

7 nights (or days depending on when someone might show up, and free Kicking Horse Coffee for all) and you're all invited.

Please note;
Be sure to bring your own mug as the most recent explosion/meteor severly depleted our supply.

Although it's a near certainty (is anything truly certain?) that the Institute is located several thousand miles from wherever you are (and against the wind), it just might be worth the trip, assuming you get here before the coffee runs out.
July 3, 2012 at 9:43 PM

Anonymous said…
In my opinion, the episode of "The Power of Art" about Van Gogh, featuring Andy Serkis as Vincent, is the finest program I've ever seen on TV.