Drinking Coffee and Admiring the Palm Trees in San Francisco

- August 11, 2012
The very first caffeinated beverage I drunk in San Francisco was a latte at SFO. It was not exceptional. In fact, I don’t even remember the name of the café. However, outside of SFO, San Francisco boasts a robust and unique coffee-drinking culture.  It totally makes sense that there are often two to three cafes on any given block. People need energy to ride bikes, walk up and down hills, and keep up such amazing gardens and streetscapes.  (Palm trees are everywhere in San Francisco, and they are NOT native. They are all planted from seeds—the Mexican Fan palms, the Canary Island Date palms and all the others. They grow in public areas, around institutions, in wealthy neighborhoods and in very modest areas, as well. The climate, it turns out, is well suited for all types of palm trees, eucalyptus and scrub oaks...)


August is a perfect time to drink coffee in San Francisco, because it is fairly cool.  During my family’s 2-week visit, every day around 3:30, as the fog started to roll in and the temperature dropped, I craved hot coffee with skim milk.  Sometimes, I went for a latte, or even chai or a green tea-based drink. 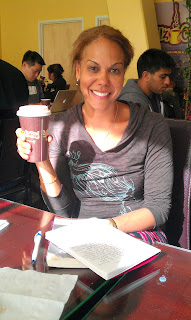 Castro---where we stayed----is chock-a-block with cafes. Initially, I went to Peet’s on Market Street. There's lot of seating---and the coffee is serviceable enough , but it’s the longstanding history of Peet’s in the Bay Area that attracted me. In 1966, when Alfred Peet opened Peet’s in Berkeley, it set the tone for gourmet coffee for the west coast---and eventually beyond. I also discovered during my stay that the coffee I consumed in the cafes at the San Francisco Museum of Modern Art and Deyoung (surprising) was Peet’s. So I got used to it and was thankful for the consistency.

Speaking of consistency, I went to several Starbucks in San Francisco. In Union Square---what I consider the midtown area of San Francisco—where one can shop at Nordstrom and easily take the bus to Chinatown---there were long farmhouse tables and lines that moved quickly. It was no-frill Starbucks.  In contrast, Starbucks on 18th Street in Castro was sheer morning joy for me. The baristas were so professional, upbeat, and handsome---and it was such a pleasure to see so many happy male couples (and some lesbian couples too) reading their newspapers and simply being together drinking coffee. I loved the vibe. Starbucks at Fisherman’s Wharf was a nice respite from the over-the-top tourism that that area offers. My latte was large and nonfat and perfectly brewed---and it was really good. The day we went to Fisherman’s Wharf, I was so tired that I could have gone for a extra-large-venti (if such a thing existed)….but by the time I consumed my latte, I had enough energy to enjoy Aquarium on the Bay and even tried several times to make eye contact with the leopard shark that kept swimming by.

One of my most intense coffee-drinking experiences was at the Fillmore Street Café—not because the coffee was exceptional, though it was good and they had skim milk---but because of the vibrant jazz history of this district and the fact that Yoshi’s ----a Japanese restaurant/storied jazz club is just across the street. Also the pastries are very good, especially the poppy seed bread, and the mural of jazz and reggae musicians made me feel warm, comfortable and welcome. I could feel a little bit of Bob Marley in that place.

Castro Café was another neighborhood favorite, just several blocks from our apartment. They made a very good latte---super-smooth. A couple of neighborhoods over, I fell in love with Lava Java, a coffeehouse right on the edge of Haight Ashbury only a few short blocks from Golden Gate Park. Lava Java is a coffee house in the truest sense. They have sandwiches! And those sandwiches, with their ciabatta bread and lean chicken breast and turkey meat---and yes, their bacon (yummy, yummy bacon) are very good. Annie, the owners, adds onions, lettuce and tomatoes. She says the coffee is good and I believe her, but the best drinks in my opinion are her green tea lattes and green tea smoothies. She imports the potent green tea that she uses from her native Taiwan. She is definitely a charming and very hip San Franciscan, but she is not thrilled about what she perceives as the downside of her location. Pointing to her front window, she shows us graffiti that won’t come off. “We close at six,” she says. “It gets a little crazy at night. Lots of homeless people, doing nothing. Not even drinking coffee here,” she explains. Still, Lava Java has been around 10 years and warmly greets those who work at San Francisco State Hospital just down the street, starting at 6 am every morning. 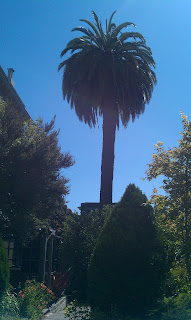 And then there is Philz Coffee, a San Francisco-based specialty coffee company that makes hand-poured, customized coffee. They don’t do espresso drinks, but they do offer dozens of blends of coffee…How can I describe their coffee (I had a cup of Tesora)? You know when you smell coffee, and it smells so good and so aromatic and then when you taste it, it is different? Well, Philz Coffee is like drinking the smell that makes you anticipate the coffee in the first place.

Good coffee is pure joy, as is “summer” in San Francisco.

Anonymous said…
That was some other participant in the Anonymous collective. Although, I'd have to agree with the sentiment.

Maybe, I'll have to create some identity. After 1000 posts it might be time.

Yours, (Mrs. Nicky), is a fun post to read. You really did the rounds. Lava Java, what a great name for a coffee house.

So, now we have left the Collective of Anonymity, and, you may refer to the 2-letter name of this number (for short) if you choose. An irrational number seems appropriate.

It really is an amazing thing these shows. All the work, not just on the clothes, but the show; the music, the lighting, the models, all of this and these shows last for all of about 12 minutes. 12 minutes for 30 models to walk down and back. Then it's over.
September 3, 2012 at 2:58 AM

It doesn’t matter if you see me or not,

I am standing right there, with no emotion.

It doesn’t matter if you miss me or not,

the feeling is right there, and it isn't going anywhere.

It doesn’t matter if you are with me or not, my hand is in your hand,

and I am not going to let go.

Let me embace you, or let me live in your heart to eternity.