When Irving Berlin wrote “White Christmas” in 1940, he was tapping into the zeitgeist of the moment---the desire to watch snow fall, temporarily turning the world into a magical paradise, while seeking warmth indoors---from a blazing fire, from human companionship and often from a cup of coffee or tea. Turns out that “White Christmas” is timeless not because it is about Christmas per se, but because it captures something in the human spirit. People like to be cozy and warm. Everyone wants to feel loved, and there is something about snow that brings out the child in (almost) everyone. 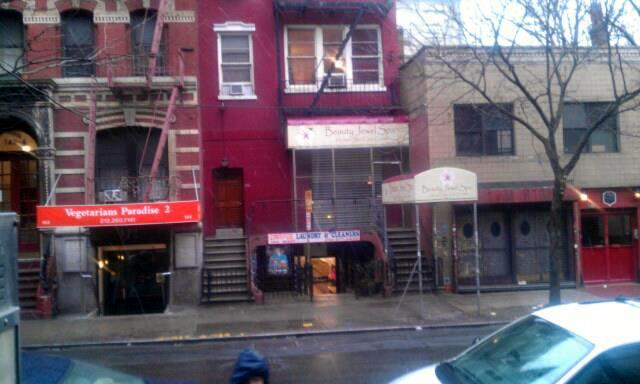 As snow has been falling across the nation this week, and in New York City today, pursuit of coffee has continued at a happily frenzied pace. I myself had exactly 3 coffee/espresso drinks today, starting with a skim latte at NewsBar Café on University Place (it had a nice spicy aftertaste), followed by a skim caramel brulee latte at Starbucks (hold the whipped cream), and finally capped off with a cup of under-$2 black coffee (perfectly plain and perfectly serviceable) at the Washington Square Diner.

I was driven not only by habit to drink coffee (this blog is about drinking coffee every day, after all), but also because I was slightly chilled most of the day (the radiator heat has been a bit inconsistent), I was a bit tired (this is a very busy time of year for everyone), and because I love consuming caffeine in the company of other people.

A group of researchers from the Netherlands were recently quoted in the New York Times discussing their research, which shows that when people feel excluded their body temperatures drop. One way to reverse this feeling of ostracism is to hold a warm drink (they cited coffee specifically and used Starbucks as an example of how people try to feel better). Their data shows that not only does holding a cup of warm coffee make people feel better and raise their body temperatures, but it also makes them more social.

So while many people will be holding glasses of wine, champagne and sparkling cider as we count down to the new year, I will make sure to make coffee, tea and hot chocolate available---so that everyone will feel happy, warm and loved. Happy New Year!