Why we need coffee now more than ever---and why not add a little cardamom?

This post is intentionally short.  Sometimes less is more---and in this season of everyone weighing in on everything, I’m going to stay on-topic.

Although the economics of coffee have a political dimension, coffee itself is not political. You either drink it or you don’t. 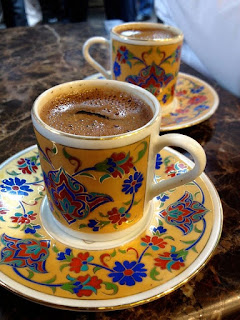 There are lots of ways to drink coffee. Perhaps you like skim milk, whole milk or cream. Perhaps you take your coffee black. Perhaps you prefer lattes and cappuccinos. Or maybe you just like a nice shot of espresso---or two or three.

Caffeinated or decaf. The choice is yours...

2016 has been challenging on practically every existential level---from numerous deaths of well-known and beloved people, to an extremely contentious election in the U.S., to natural and man-made disasters and a surge of refugees due to what the UN High Commissioner for Refugees, Filippo Grandi, called, “the biggest humanitarian and refugee crisis of our time," which is happening in Syria.

Syrians are born coffee drinkers. It's part of their culture. In fact, it was Syrians who introduced coffee to Turkey in the 1500's. Turkish coffee is actually Syrian coffee.

Interestingly, one of the things that makes Arabic coffee so good is the inclusion of cardamom in the brew---often crushed and mixed right in with the ground beans.  We’re used to cardamom in baked goods that have a slightly savory taste, as well as cardamom in chai---but cardamom in coffee. Well, if you haven’t tried it, it’s worth trying.

Right now, 30 million Syrians are either displaced, in need of humanitarian assistance or on the move as refugees.  Regardless, people wake up every morning and have to somehow start their day. That’s why coffee is more important than ever. And isn't nice to have a safe place to drink it. 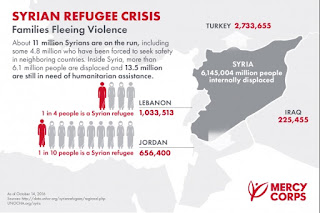 It takes energy and drive to stand up to the myriad challenges of life---from the most severe problems, like being a refugee, or being under direct attack, to the stress of uncertainty that defines almost every aspect of life. Especially now.

Coffee: It’s one thing that people can hold on to in times of uncertainty. Hard to argue about that.

Allan Hawkins said…
Coffee is drunk by majority of population. Although, it has many advantages, yet excessive consumption can cause serious health issues. This was very informative. Thank you for sharing.
November 30, 2017 at 5:47 AM