- June 16, 2019
Non-dairy milk is the new normal. Gone are the days when a few cartons of soy milk, or maybe almond milk, were relegated to the back shelf at the back of the bodega. It is now perfectly normal to cream one’s coffee with various types of milk made from plants, nuts, and grains.

One-third of all American households consume some type of non-dairy milk. The list of alternate ‘milks’ is long and growing. Options include coconut, soy, rice, almond, hemp, barley, cashew, and the ever-popular oat milk. At the same time, the Dairy Farmers of America reported a $1.1 billion drop in sales between 2017 and 2018 (from $14.7 billion to $13.6 billion), while the Plant Based Food Association reported a 9% increase in sales of nut- and plant-based milk, reaching total sales of $1.6 billion in 2018.

What does it take to be considered milk?
Some people scoff at the idea that the white liquid that is extracted from plants, nuts, and grains is actually ‘milk’.  The dairy industry has gone as far as asking the FDA to prevent non-dairy products from being labeled as milk. Though their case was heard, there has been little headway with this effort, especially at the circuit court level.

The reality is that all of these milks were originally used as alternate creamers for coffee. I would argue that without a thriving coffee culture in the U.S., we would not have such a burgeoning market of earth-based creamer options. It is truly a wonderful thing. 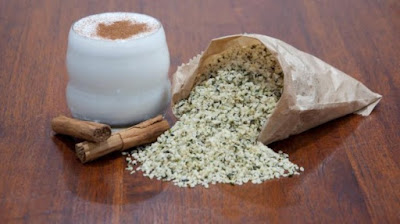 In fact, the alternate milk consumption craze first took hold in cafes and coffee-shops, before becoming available in the corner supermarket. Several years ago, almond milk (huge source of vitamin A) was a big deal, and then came the oat milk craze (what a delicious experience), and now hemp milk is having its day in the sun.

Hemp--courtesy of cannabis sativa
Hemp is a non-psychoactive part of the cannabis sativa plant. It is a nutrition powerhouse, containing magnesium, iron, zinc, calcium, vitamin B1, and protein. It’s widely sold in stores across the country, especially on the coasts, and you can view a how-to video on YouTube, so you can make your own hemp milk with raw seeds, any sweetener you want to use, and, of course, cheesecloth.

Hemp is known not only for being protein-rich, but for having a protein that contains all the essential amino acids that humans need from food. In fact, gram for gram, hemp seeds are naturally higher in protein than beef. It is also high in omega 3 and omega 6, with related benefits for skin and cardiovascular health.

And then there is the taste.  It is creamy, nutty, and even buttery---and most important, it’s really good in coffee. I tried hemp milk for the first time last month while out with friends for my birthday. It was an amazing experience all around. Check out our video below.  Keep drinking coffee. Happy PRIDE!

jessica said…
DUDE. What an awesome post. I mean, being vegan, I'm obviously biased, lol. But I love that you pulled in the business stats---indeed, plant-based food is the #1 growing food trend in the world, with big-time investors and even The Economist saying it's the smartest bet for your investment dollars. "Beyond Meat" went public a few months ago, and it was the biggest IPO of 2019! And yes, the dairy industry's labeling fight was just...sad.

In terms of earth-based milks, as you call them (love that btw), I've had quite a journey. From age 14 to 27, I was all about soy milk. I used it in my cereal and smoothies, and based my choice of coffeehouse on whether they had it. But our bodies change as we get older, and I started to notice that my stomach wasn't tolerating it as well a few years ago, and switched to almond milk. I do miss the creaminess of soy in my coffee, but almond is pretty tasty and very low in calories if you buy the unsweetened kind. Also, if you can find it, unsweetened CHOCOLATE almond milk is simply amazing.

When I moved to NYC for college, I had a huge wealth of vegan grocery options available to me, so I tried every non-dairy milk I could find. My least favorite is rice milk, which IMO, is flavorless, watery, and can really back you up, if you know what I mean. I tried oat milk many years ago and thought it was okay---honestly, I'd love to know how it suddenly blew up so big at coffeehouses the past couple years...probably has something to do with the almond prices going up recently...maybe they needed a cheaper alternative?

To this day, chocolate hemp milk remains my all-time favorite milk. It's impossible to find unless you go to Whole Foods or order online. But, all those good fats make it super creamy and delicious. And as you said, it's one of nature's perfect foods in terms of omega 3/6 ratio and containing all 9 amino acids. The only downside to hemp milk is that unlike soymilk or almond milk, you can't really drink it unsweetened. At least, I can't. The super strong taste needs a sweetener for balance...so if you're watching calories, that can be tough. It's also more expensive than almond milk, but I'm sure that'll change as demand grows.

Anyway, loved this post! BTW, pea milk is a thing now, too. I do not recommend it, lol.

f5lt3u87d0 said…
As mentioned in four.four Availability of Licences, it is usually beneficial for overseas gaming enterprise operators to ascertain a local entity as a result of|as a outcome of}, in follow, it is troublesome for them to acquire certain licences. However, casinos and internet cafes require certain licences for operation, as specified beneath 5.1 Premises thecasinosource.com Licensing. Under the Tourism Promotion Act, licensed casinos are not allowed to allow the doorway of Korean nationals, excluding a facility in Gangwon Province.
December 24, 2022 at 6:03 PM