Is There a Coffee-Covid Connection--and Why Was Coffee So Heavily Consumed in 2020?

Have you ever thought about the relationship between coffee and covid? Probably not, but some researchers have invested a lot of time to find out. A new study shows that drinking coffee reduces the risk of getting covid.  The study, which was led by researchers from Northwestern University, found that drinking at least one cup of coffee reduces the risk of getting covid-19 by 10%. Based on data from 40,000 people in the U.K. Biobank, the study focused not only on the impact of coffee on covid risk, but also oily fish, processed red meat, vegetables, and fruits.

According to the researchers, coffee boosts the immune system via different pathways. It’s a major source of antioxidants---largely phenolic acids--- in the American diet (the #1 source according to researcher/professor Joe Vinson, PhD). Plus---coffee has an anti-inflammatory effect in the body, in addition to being a bronchodilator, which can open up the airways to help relieve respiratory symptoms. 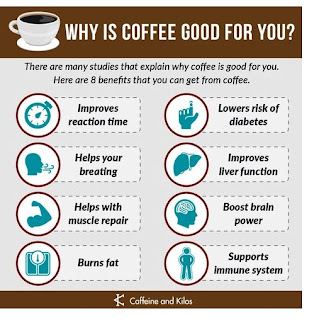 This study, which was published in the academic journal, Nutrients, earlier this year, went beyond coffee. The study was designed with a broad purview, involving multivariate analysis. An entire variety of foods were analyzed, including fruits, vegetables, and processed meats. Not surprisingly, fruits and vegetables, with their anti-inflammatory, antibacterial, antiviral properties, had an immune-boosting effect when consumed, also resulting in a lower risk of covid-19. Whereas, processed meat, like bacon and sausage, actually INCREASED the risk of covid-19. (Please say it isn’t so!)

Coffee can stand on its own in the pantheon of healthy beverages, but this study showed that the most immune-boosting consumption pattern involves a lot of vegetables and fruit, oily fish (salmon and cod), and  coffee. Pretty much every health-related question comes down to this: Is it more good than bad for you; is there a net benefit; is it a source of toxins”? 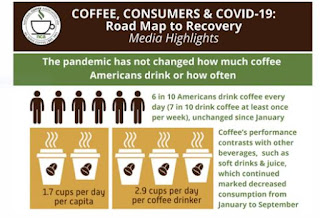 For me that's low-key obvious, but not everyone consumes coffee, for various reasons. Interestingly, according to a poll from the National Coffee Association (NCA), American coffee-drinking on a per capita basis has not declined, although during the early months of the pandemic, sales of soda and sweetened juices declined. Overall, Americans still drink, on average, 3 cups of coffee a day---60% of Americans drink coffee daily.