If you think about it, for most people, coffee is an acquired taste. Mainly because coffee without embellishment is generally bitter. So how do we deal with that?

People deal with that in two ways. Either they pump up their brew with sweeteners and creamers—or they learn to love the bitterness, becoming a ‘black coffee’ person. Studies have shown that people who learn to love bitter, black coffee associate that bitterness with coffee’s stimulating effects. But there are some people who just love the taste of bitter.

Our palates have been conditioned to respond to bitter tastes. Consuming bitter food and beverages can have a cleansing effect in the body, but bitterness is also associated with certain toxins. There's more: Bitter-tasting food and drink are widely used symbolically, such as the role of horseradish at the Passover seder, or the Chinese concept of “eating bitter” as a metaphor for resilience.

I love bitter stuff---coffee, grapefruit, wasabi, tabasco sauce... But I mainly like bitter stuff in the context of balancing it with one or more of the other four major tastes---sweet, salty, sour, and umami. Along the lines of coffee with a dollop of skim or maybe with an oat milk creamer. 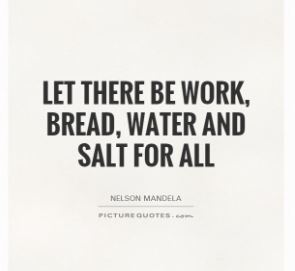 The underlying mechanism for this de-bittering effect is that salt decreases caffeine’s solubility. It also activates salt receptors on the tongue and the sodium ions help prevent your taste buds from registering bitterness. Salty tastes at any concentration are known to suppress bitter tastes in general. That’s why beer and chips make so much sense. Another interesting fact: Salt can make stale water fresher.

ALSO: Salt in coffee has been a thing for a long time in places like Turkey, Hungary, and Scandinavia.

It gets even better. Salt not only smooths out the taste of coffee, it also makes it thicker and denser (yum). Salt amps up coffee’s flavor and makes it even healthier by rendering it less acidic, as well as by decreasing the need for sugar.

Salt in coffee really does work, but remember, just a pinch will do. Nothing tastes better on a spring morning than a smooth cup of non-bitter brew. Drink up and enjoy!