The Storied History of Coffee: Sex, Science, and the Politics of Respectability

- December 10, 2022
It is the stuff of dystopian novels. Imagine this: Coffee is illegal. It is considered dangerous and illicit. Consumption can be punished with jail, or even death. Your life can be ruined if there is any evidence that you are trying to grow your own coffee trees. If someone comes into your house and smells hot brew, they must report it to the authorities.
It is so far-fetched as to seem laughable, but once upon a time, coffee was considered dirty, lascivious,  and dangerous. Although during the 1500’s, coffee was widely used for social and intellectual purposes throughout the Middle East, in Persia, Egypt, Syria, and Turkey, it was generally not available in Europe. At that time, many in Britain viewed coffee as some exotic, “Muslim” brew.
Slowly coffee made its way into European culture, where it took hold with fervor. By the 1600’s, coffee had sparked a full-on social revolution in Britain where coffeehouses became the center of social life for many men (and a few women as well). 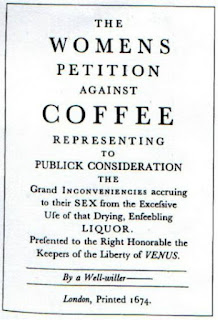 In a British coffee house in the mid-1600’s, you could not only drink coffee, but you could also place a bet, write a political manifesto, hire a prostitute, buy literature, engage in commerce, or buy and sell stock. You could warm yourself by the fire and have your mail delivered directly to the coffee house. People who were not in coffee culture were pissed. Coffee house habitues stayed away from home for hours, well into the night (sometimes falling asleep), at coffee houses. There was a major backlash against coffee culture starting in the 1660’s.
One of the most famous anti-coffee screeds from that time was “The Women’s Petition Against Coffee,” published in London in 1674. Women accused men of being impotent and uninterested in sex because of coffee, which they called the “newfangled, abominable, heathenish liquor called coffee.” They wrote that their husbands had been turned into eunuchs from drinking coffee.
In response to this pamphlet, there was a response: “Men’s Answer to Women’s Petition Against Coffee.” “ 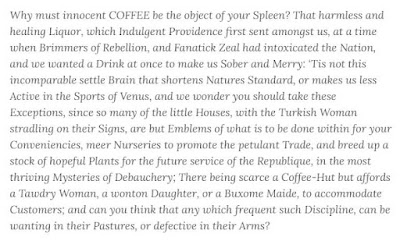 In other words, the men were saying…coffee makes us even hornier and gives us more prowess in bed. Have you seem all of the ‘tawdry’ women, ‘wonton’’ daughters, and ‘buxom maidens” who provide sexual services to coffee house denizens? Come on! We are busy contemplating the future of our great nation and energizing ourselves for the good of hearth and home.
Less than 100 years later, coffee would become the fuel driving the Industrial Revolution in both Europe and the United States, feeding the incessant labor needs of capitalism.
Yet despite its utility, there was still this sense that drinking coffee was a vice, like smoking cigarettes or drinking alcohol. There were news articles linking it with cancer, impotence, infertility, and mental problems. This went on throughout the 1900’s. But as we moved into the 21st century, the science caught up with the reality.
Researchers at Harvard started publishing reports showing that coffee reduces the risk of many cancers, as well as Alzheimer’s disease, Parkinson’s disease, cirrhosis, depression, stroke, and secondary heart attack. And then, along came the coup de grace, a recent large, observational study, published in the European Journal of Preventive Cardiology showing that 2 to 3 cups of coffee a day decreases the risk of developing cardiovascular disease by 10%-15% and lowers the risk of death by 27%.
As I sign off, I’d like to note that the coffee-cannabis parallels are hard to ignore. We will be discussing this shortly. Thanks for reading. Remember to drink coffee, stay radiant, and enjoy the holiday season.