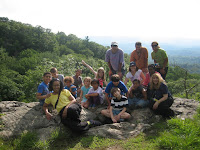 At night, in the woods, when there is no wifi or temperature-control device available, you realize that your deepest, darkest fears are probably real. However, in the morning, when it’s sunny out and you wake up and stretch, you feel much better and reconsider your bleak thoughts from the previous night. Camping feels like a more extreme version of reality. The one constant, it seems, is the comfort of coffee in the morning.

Recently, I went with a group of friends and our kids camping. Oh, what an adventure! I was in charge of the coffee, but had the added challenge of not knowing whether there was a stovetop or electricity. Out of desperation, I purchased Maxwell House---something I haven’t done in years. (My friend also brought along Via from Starbucks).

We needed a robust supply of coffee, as every adult there was counting on the bitter brew to ease into the day. We used a stovetop powered by a propane tank visible from our window. We also used Styrofoam cups---an environmental faux pas of enormous proportions…but the cabin did not come stocked with china, so we did what we had to do. We boiled water in a frying pan and made cup after precious cup, which was drunk with a sense of sacred gratitude by each one of us.

…And now an important health update about coffee and liver disease: New findings from a study published in the June 2011 issue of Gastroenterology showed that in patients with hepatitis C treated with peginterferon plus ribavirin, coffee drinkers were twice as likely to respond to their treatment.

There is a strong evidence base showing that coffee has positive effects in the liver, specifically, coffee is associated with a lower level of liver enzymes, reduced progression of chronic liver disease, and a reduced incidence of liver cancer.

Ironic but true, I drank Maxwell house in the woods with a group of friends and enjoyed it immensely. By doing so, I discovered quite by accident that coffee hubris is as misguided as any other type of excessive pride. Certainly, I enjoyed the Via and the cup of Sumatra I had upon returning home. But, when one is in adventurous situations---camping out with kids, at a lonely interstate rest stop, in a fancy hotel room with a broken coffee maker—it all comes down to getting a cup of coffee. And when you get it, you may even be tempted to say: “Good to the last drop!”

Anonymous said…
Coffee hubris! Yes. A very good point. The same could be said of wine.

Interestingly, there are some areas where people are bargain hunters and others where expense = quality. People tend to bargain hunt on staples and discretionary items they tend to closely correlate quality with price.

I, myself, have dabbled in Maxwell House. Although, I tend to doctor it up with low fat cream and Splenda. If you take your coffee straight up, perhaps it would be less appealing.

Anonymous said…
They put you in charge of the coffee, I guess that was a safe choice! Mrs. Folger could have been on the trip and it would have still fallen on you to rustle up the Java.

This financial mishigas may be connected to coffee somehow. Too little coffee, too much debt, just a theory I'm working on. Hard assets, commodities, coffee, maybe it's time to stock up. After all, it's easier than keeping barrels of oil 'round the crib (especially if you have white carpeting).
August 8, 2011 at 12:36 AM