A Shout out to a Coffee House in Bahrain: Where Lattes and Tear Gas Mix

Although the Kingdom of Bahrain is renowned for its pearls and oil, as well as its World Trade Center and Financial Harbor, it is also getting attention for how the ongoing Arab Spring Revolution has been playing out here.

One of the hotspots of the uprising it turns out is Costa Coffee, a café in the capital city of Manama.

In an article published in the New York Times on December 29, 2001 with the title “A Haven for Dissent in Bahrain, Where Lattes and Tear Gas Mix,” Adam Ellick writes about Bahrainis who get together at Costa Coffee not only to drink coffee and eat sweet treats with their friends and families—even bringing their children—but also to protest the lack of democracy in their tiny island nation of 1.23 million people.

What’s the issue? According to Ellick, “The island is governed by a Sunni family, the Khalifas, with ties not only to Washington, but to Riyadh. The country is majority Shiite.” The Bahraini Shiites complain of systematic discrimination, exclusion, and lack of access to jobs, education, and positions of influence. It is an unfortunate example of a common problem. There have also been reports of torture and killings of dissidents. 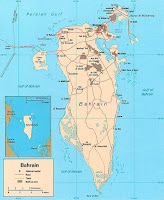 The desire for justice is universal and the lack of justice that has emboldened people all around the world also encourages them to seek community. Where? In cafés and coffee houses.

At Costa Coffee, coffee-drinkers are regularly disrupted by militia wielding tear gas and seeking to scare them and inflict harm. But people keep coming back for more coffee and more community. Costa has become a command center of sorts for intellectuals and government protesters, who tweet their messages about what’s going down in the streets of Manama

Fear has been transmogrified by a sense of purpose and community. Coffee undoubtedly has had an energizing and focusing effect, providing a sense of well-being and warmth in the face of government-sponsored tyranny. Ellick writes, “This surreal scene in which activists gather at a high-speed café with high-speed Internet to a backdrop of tear gas illustrates the contradictions of Bahrain---a cosmopolitan, successful banking center with a well-educated population that is facing crushing repression and sectarian tension."

Bahrainis love to drink lattes with gingerbread syrup...Here's to their ability to achieve their societal goals in a nonviolent way---and to drink coffee in good health and in peace.

Anonymous said…
Bahrain is chaotic. And yes, the US has interests there, the 5th Fleet of the US Navy is based there.

There is only one democracy in Middle-East; Israel. Hopefully, Iraq will be the second one. The whole point of the Iraq war was not WMDs (which were most certainly there but easily hidden and moved once we told them we were coming) but to change the Middle-East to a different political culture.

Iraq lost its dictactor and now Egypt, Yemen, Lybia, and perhaps soon Syria will also be rid of theirs. Think there's a connection?

The war in Iraq was never worth it economically, or in the lives spent, in my opinion. And it wasn't about WMDs or Oil, anyone who thinks this is just...well, I won't call them names, let's say unfortunately deprived of intelligence, it was about introducing representative democracy in order to change the region to something better than what it has been for the last 2000 years.

Vladislav Yakov said…
We Can supply Aviation Kerosene,Jet fuel (JP 54-A1,5), Diesel (Gas Oil) and Fuel Oil D2, D6,ETC in FOB/Rotterdam only, serious buyer should contact or if you have serious buyers my seller is ready to close this deal fast contact us below:now base email us (neftegazagent@yandex.ru)