In the summer, Thursday nights at MOMA are dedicated to listening to music in the Sculpture Garden. Last Thursday the featured group was OSHUN, two young women, who create Afro-futuristic music that combines hip hop, R&B, acoustic harmonizing, heavy drum and bass, and EDM. (If you listen carefully, you might just hear woven-in samples from 90’s conscious hip hop groups, like Tribe Called Quest). 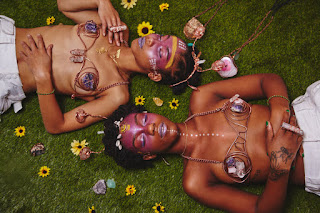 The garden was abuzz with Afropunk aficionados, the after-work crowd, beautiful people with big afros, MOMA members---and random people like us, who love MOMA and enjoy drinking coffee when we’re there.

Thandiwe and Niambi Sala are recent NYU graduates, who chose the name OSHUN for its multifaceted meaning. Oshun is a West African deity---a goddess, also known as an orisha, who is the deity of fresh water, luxury, love, destiny, divination, pleasure, and sexuality. She is revered as the goddess of the Osun River in Nigeria. Their goal is to channel “the spirit of their ancestors in order to manifest a sweeter tomorrow for us all.” 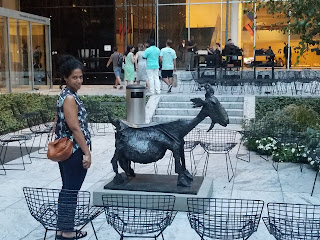 I don't often come just for music. In fact, when I come to MOMA, I come mainly for art. For me, the Sculpture Garden, with its sculptures and landscaping, is magical. One of my favorites is Picasso’s “She-Goat.” Picasso created She-goat (she may be pregnant) from discarded materials---scraps of metal, palm fronds, ceramic shards, and more. The goat's belly and rib cage were created from a wicker basket, while her udders were fashioned from two ceramic jugs.

There are several compelling exhibits at MOMA now, including one focused on Yugoslavian architecture from 1948 to 1980---a period in which brutalism in architecture was all the rage. Brutalism is derived from the word “raw” which in French translates as “brute.” 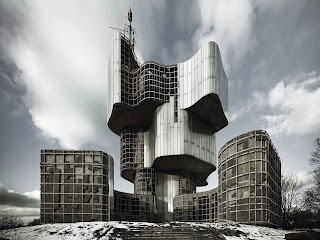 If you’ve ever seen large concrete, multi-storied buildings that at first glance seem artless and oversized, you’ve seen brutalist architecture. Contrary to this reaction, brutalism was used by architects to create transformative housing, with gardens in the back, and functional space for lots of people---a democratizing force.

In the meantime, I’ll be traveling and trying to get in a few more beach days. Keep drinking coffee...and make sure to check out that exhibit you've been wanting to see--summer is almost over.

jessica said…
You're so cultured! I've been living in the city for 13 years and have only made a handful of museum trips. I LOVE "She-goat". Also, I'm a huge interior design buff and, being the colorful bohemian lady that I am, have always had that exact thought about brutalist architecture -- cold and boring! But you're absolutely right -- some art is beautiful because of its cultural significance rather than its aesthetic. Thanks for a fun break during my day! :)
August 6, 2018 at 2:19 PM

Nicole Gray said…
Hi Jess, Thanks for checking out the post. Considering that you live in NYC, perhaps we could grab a cup of joe one day at MOMA...We can avoid all of the brutalism, and opt for things that appeal to a "colorful bohemian lady." What's better than being bohemian and loving coffee?
August 8, 2018 at 2:29 PM