Embracing the Yang: Coffee in China 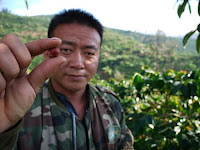 In China, 2011, the Year of the Rabbit, may very well become the year of coffee. According to a report from Marketplace on National Public Radio , consumption is up 25% a year. In the last 10 years, Starbucks has opened 400 locations, and in November 2010, Howard Schulz announced that the first Starbucks coffee farm will soon open in the Pu’er region, located in Southwestern China.

The driving force behind this trend is the collective yang energy of the legions of urban and professional Chinese city dwellers who are rapidly increasing their coffee consumption. Yan Ciyong, a 26-year-old farmer (seen here holding a red coffee bean) has started growing coffee and earning a great deal of money. He is on the cutting edge of a new trend in a country where tea consumption is the norm. Meanwhile, 70-year-old Liao Xiugui, a farmer who specializes in growing coffee and actually drinks coffee (rare among famers in China) has become a highly sought after teacher. Fortunately, tea and coffee are not competing for farmers’ attention---the two plants are grown at different times of the year.

Every day it seems, business analysts in the United States discuss China and its vast resources, including its remarkably talented, disciplined, and ambitious population. And while some pundits discuss China’s increasing crude oil consumption---many people in China are getting their raw energy from a nice hot cup of coffee.

Nicole Gray said…
To anonymous: thanks for your comments! I need to incorporate these statements into my (very limited) Mandarin repertoire!
January 11, 2011 at 2:10 PM