Pharma’s quest to unlock the molecular mystery of coffee

- September 08, 2016
It’s fascinating to consider how coffee is de-caffeinated. The general idea is that the coffee beans are steamed and then rinsed repeatedly with a solvent to extract the caffeine, while leaving the other components intact.

What happens to the caffeine? It turns out that when coffee companies extract caffeine from coffee beans, they send the caffeine to pharmaceutical companies. Pharma companies then take the caffeine and use it as part of analgesic medications, such as Excedrin and other OTC medications.

The magic of caffeine
Coffee contains lots of things besides caffeine, which is just one of the hundreds of bioactive ingredients found in coffee, in addition to antioxidants, chlorogenic acids, melonoidins and other components.

All of the components of coffee combined confer numerous benefits to those who consume it, such as a decreased risk of diabetes, Parkinson’s disease, certain types of cancer and depression, among other things. However, as the world’s most consumed psychostimulant in the world, coffee owes its astounding popularity to its caffeine.

Targeted adenosine activity
In terms of its mode of action, also known as MOA, coffee is a nonselective antagonist of several adenosine receptors—A1, A2, A2b and A3---meaning it blocks the activity of these receptors, resulting in specific reactions in the central nervous system and the cardiovascular system.

Caffeine’s MOA is compelling because of its immediate and obvious benefits---increased energy and alertness and the ability to perform almost any activity, whether it’s productive or not, better. It all comes down to adenosine blockade.

However, developing effective targeted adenosine modulator therapies has been challenging, because of the ubiquity of adenosine receptors and the problem of side effects. The goal is to not only identify druggable adenosine targets, but  to develop a drug that hits that target without systemic side effects. In fact, there is only one FDA-approved selective adenosine agonist---Lexiscan (regadenison), which is marketed by Astellas. 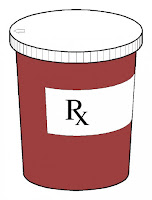 The first and only adenosine agonist
Lexiscan is approved for use in cardiac stress imaging in patients who are unable to use a treadmill or stationary bike. For those patients, IV infusion of Lexiscan increases blood flow to the heart for diagnostic purposes.

Companies with adenosine-related products
Three companies---Astellas, Fujisawa and Bedford Labs, manufacture a pure adenosine injection, which is used clinically to help normalize certain abnormal heart rhythms. Meanwhile, Adenosine Therapeutics has been at the forefront of adenosine therapeutic research, with mixed results. The company has been in business since 1999 and has struggled financially, continuing to look for financing or a partner to help it bring its phase 3 cardiac stress agent, Stedivase, to market.

At the moment, coffee remains the most reliable way to manipulate adenosine receptors and achieve physical and psychological (not to mention) social benefits. Drink up.

Colingwood said…
if not then you should think about to go with the same as this is an amazing movie will surely help you to make your day. online pills