The first thing you should know about Chock Full o’Nuts is that is does NOT have nuts in it. It may seem obvious to people familiar with the brand, but it has been such a source of confusion that recently the folks at Massimo Zannetti Beverage Company added a statement on the container: “100% PREMIUM COFFEE, NO NUTS, JUST COFFEE.”

Wouldn’t it be easier to simply change the name? Maybe, but with such a rich heritage dating back almost 100 years, it would be a loss. When William Black opened his nut business in NYC (at Broadway & 43rd) in 1926, he had 18 shops; however, when the Great Depression hit, nuts were considered a luxury---but coffee was still essential. In 1932, Black revamped his nut shops, and started selling a cup of coffee with a sandwich for five cents. By 1953, Black was selling his coffee in supermarkets under the “Chock Full o’Nuts’ name, and two years later, his brand became America’s #1 selling coffee. Over the years, it has been the official coffee of the NY Knicks, the Yankees, the NYC Marathon, and Madison Square Garden. 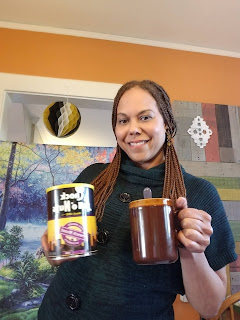 What is it about Chock Full o’Nuts? The brand is solid, with a full offering of dark and light roasts, caff and half-caff, instant, and pod options, culled from farms in Hawaii, Costa Rica, and Brazil. But there’s more. From the beginning, Chock Full o’Nuts was a brand for the masses---high-quality coffee at low-cost prices and unforgettable, feel-good advertising. The jingle says it all (note that ‘billionaires’ was originally ‘Rockefellers’’ and was changed at Rockefeller’s request):

Like many other coffee entrepreneurs, William Black was ethical and progressive. In 1957, he hired baseball great, Jackie Robinson, as Director of Personnel, encouraging fair hiring practices, inclusion, and diversity. He was a civil rights champion, who donated regularly to the NAACP, and when his lifelong friend (and auditor for his company) developed Parkinson's disease, Black founded the Parkinson's Disease Foundation. 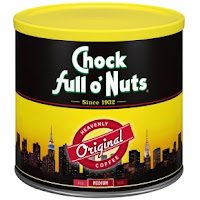 In what can only be called fortuitous serendipity, or perhaps the intersection of coffee and good things, coffee has been shown in numerous studies to decrease the risk of developing Parkinson's disease, a neurodegenerative disease, which affects movement and walking, with characteristic tremors. 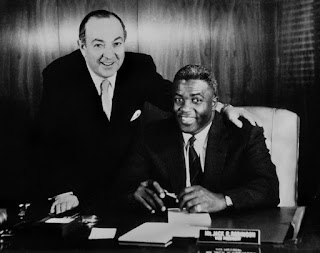 Since not many people drink more than 10 cups of a coffee a day (myself included), it's more instructive to look at the group of people in this study who drank 4 to 9 cups of coffee a day---this group had a 38% decreased risk.

There are more than 19,000 coffee-health studies out there, so there's a lot of data to parse. However, one thing we know is that coffee is the largest source of antioxidants in the American diet. For example,the antioxidants niacin, potassium, and trigonelline, in addition to the molecule caffeine, are thought to contribute to coffee's neuroprotective effect through adenosine blockade. In addition, subsequent increases in the neurotransmitters, acetylcholine, serotonin, and dopamine increase the "fitness" of the central nervous system, and caffeine has been shown to stabilize blood-brain barrier integrity in animal models.

William Black knew something good was brewing with coffee when he started Chock Full o'Nuts. He knew that people liked it, and that it could help him do good things in the world. But little did he know that one day coffee would be recognized for its health-boosting properties. Certainly, he would be thrilled. So let's raise a cup to William Black. Cheers!

I had read about the study regarding coffee as a preventative to Parkinson's.

However, I wonder about the size of the cups of coffee. When traveling through Europe, most of the cups were smaller than American "mugs". I wonder how my coffee intake compares!

Thank you and be well!