When Starbucks closed due to the pandemic in mid-March, it hit me hard. I reasoned that if Starbucks was closing, then things must be serious, and indeed they were serious---and still are.

What is it about Starbucks?  First of all, Starbucks is everywhere. However, their power in this market is about more than size. It’s also about scale, branding, and ethics. As of early 2020, there were roughly 30,000 Starbucks locations around the world, nestled into pretty much every nook and cranny of planet Earth. Everyone recognizes the logo and what it stands for---coffee and other hot drinks, with some snacks and a la carte food offerings, a place to sit, free wifi, community with other people, and the right to sit peacefully without being disturbed. Starbucks also has the distinction of being the largest buyer of certified Fair Trade coffee in the world.

Early on, Starbucks branded itself as a “third space”---a place between home and work; a place to think, to read, to work, to talk, and to simply exist, all while drinking coffee and being among other coffee-drinkers.  It became known as the place you could go work all day, without continuously spending money. You could buy one cup and “drink” it all day long, all while using free wifi and smelling the  satisfying aroma of freshly brewed beans.

It was not, however, business as usual. Starbucks has implemented three key protocols that must be observed. All orders should be online; all transactions should be cashless; and pick-up is contactless. There is human connection, happily. At the threshold of the store, Starbucks has set up a service counter where a live human being, in a mask, gives you your order. Good enough for me.

An article published in Scientific American in August 2011, posits that there are two types of people: the caffeinated and the uncaffeinated. These two groups are dichotomized between being productive and upbeat, or being sleepy, dreary-eyed, and grumpy.

In the end, however, it all comes down to being productive and to managing mood. One term from the article, “manufactured morning people”, stands out. The central idea is that without coffee we are not the same people. Without coffee we are not aligned with the productivity-on-demand culture we live in. Being a manufactured morning person is a necessity to be successful in such a world.

I largely agree with this idea, except for the fact that drinking coffee also energizes you for other things besides work---you can learn, or listen to a concert, or engage in artistic expression. And aren’t we manufactured in lots of ways by virtue of what we consume, and how we conduct our lives in general? 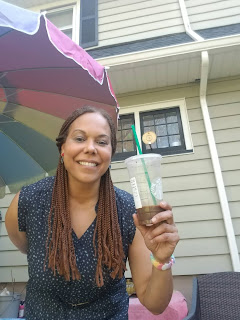 I would argue that coffee is more than a device to amp up one’s productivity. Coffee is a culture in and of itself that is ritualized, healthy, and positive overall. Maybe I was feeling so good about Starbucks reopening because of the association between drinking coffee and being happy.

In fact, clinical research has shown definitively that caffeinated coffee improves mood, reaction time, vigilance, attention, learning, and general mental function. On the other hand, the ritual of coffee-drinking and the community that comes with it benefits us in more ways than I can describe here. I am proud to say that I am a stalwart coffee-drinker and a manufactured morning person. How about you?